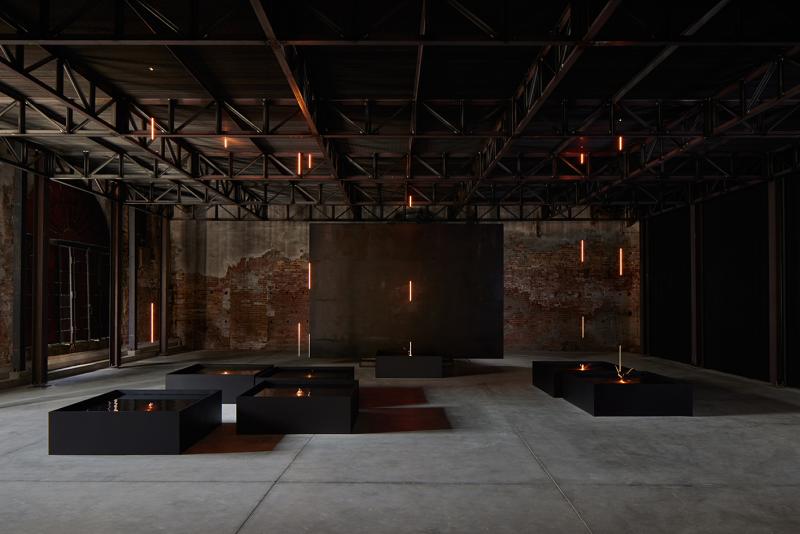 The empty darkness of that wall, of those stones, of everything inanimate – in Caravaggio’s painting, that void seems to be the very condition of the scene, what makes possible the vibrant, throbbing light that makes those bodies live and move. This radical contrast between light and darkness makes the scene into something that happens before our eyes, and not merely something that will happen or has already happened.
It is this contrast that interests me, or rather the idea that only through the conflict and unresolved tension of forces we can see, even if only for an instant as a blinding light, the origin of things – an origin that, coming from nothing and destined to return into nothing, exists only in the ‘here and now’ of its appearance. An origin that appears and that at the very moment of its appearance is no longer there.
What I am trying to capture is the change of state, that instant in which something is becoming something else, that energy and power that exist in the flash of absolute instability between the moments of equilibrium that are the before and the after.
That is why I decided to work on metal and its transformation.
About eight millennia have passed since human beings began to use metals: copper, gold, iron, aluminum. Metals are characterized by strength, but also by ductility. They appear inert, but they conduct energy and heat.
The fork on our table, the wheel of the train, the airplane, the components of an engine, the ring on our finger, the monument in a square, a scalpel, a bullet: before being what they are, all these objects were incandescent liquid. All the metal that we see, that we touch, that we use, and that constitutes the skeleton of the living world within which we move, has solidified in the darkness of a mold to then pass through a die and cool against, or inside, something.
I want to free metal from that closed form, to expose its luminous liquid origin.
Once melted, metal is no longer simply static, no longer something that merely exists, unchanging – instead, it expands within a chronological dimension of appearance and disappearance: it becomes time itself.
Steel is created only at very high temperatures, and when energy and heat bring it back to its original liquid state, it glows with red-hot light; it becomes stolid hardness only when that light goes out.
Only in the change of state, and therefore only in living time, does steel become light.
This is a work about continuous loss, about the impossibility of holding back, about the inexorable and unstoppable flow of all things. But it’s also about the fact that being is only revealed in vanishing, that light is an evanescent interval of darkness.
Something keeps dissipating, consuming, yielding; the molten drops ceaselessly appear, fall, and vanish. I am trying to scan time – that which both creates being and consumes it – through something equally elusive.
Maybe mine is, at its core, a work about the open wound that is life.
Why can’t sculpture flow like time instead of being a cold, rigid monolith devoid of the vital energy that produced it?
Instead of fixing the instant of the passage, making it once again something static, I show the passage itself, the appearance and the disappearance, the glowing, ephemeral limit that divides and connects the twin darknesses of the before and the after.