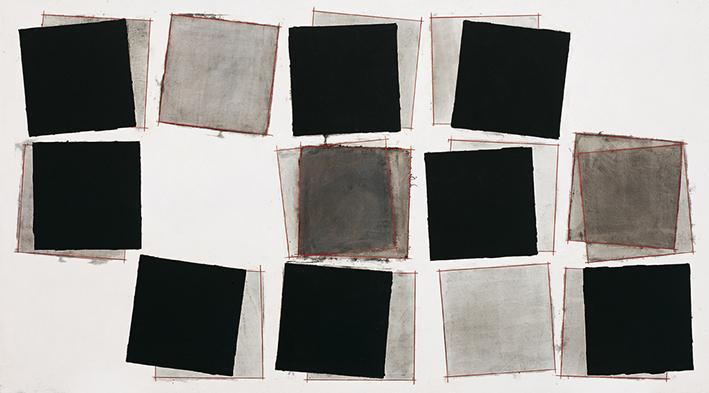 CARLO CIUSSI. THE METAMORPHOSIS OF COLOUR
curated by Davide Mogetta

On the tenth anniversary of the artist Carlo Ciussi’s death, the Fondazione Ghisla Art Collection in collaboration with the Archivio Carlo Ciussi is pleased to announce the exhibition Carlo Ciussi. The Metamorphosis of Colour, the first international retrospective dedicated to the artist since his death. The exhibition opens on Saturday 19 March 2022 5.30 p.m. and can be visited from 20 March to 21 August 2022 in the Foundation’s exhibition spaces.

Carlo Ciussi (Udine, 1930 - 2012) is one of the leading figures on the twentieth-century Italian art scene: his work runs through the whole of the second half of the last century to the beginning of the new millennium, and has maintained its basic coherence despite the wide range of outcomes in different periods of his unceasing artistic practice. The exhibition offers the opportunity for an overall reading of the artist’s work, making it possible to retrace its history.

The exhibition’s layout is chronologically organised, offering an overall vision of the various periods in his way of making art since 1965, after his first appearance at the Venice Biennale in 1964, right up to 2012.
The twenty-seven works exhibited are representative of the essential turning points in Ciussi’s history, from the first, where the focus is on the geometric layout of the square in tones of grey and black, amongst which III.65 (1965), part of the Fondazione Ghisla collection, later filled with colours and then developing over several decades, right up to his last works.
Some of the paintings were exhibited in the initial Milan exhibitions at the Galleria Stendhal in the ’60s; others, such as XLI (1967), at the important exhibition dedicated to Ciussi by the Paul Facchetti Gallery in Paris in 1967 (and then in its Zürich gallery in 1971) or again, in 1967, at the IX Bienal in São Paulo, Brazil (XXIII, 1967), later to be presented together in 1974 on the occasion of his first retrospective at Palazzo Torriani, Gradisca d’Isonzo.
After a twenty-year period in which Ciussi seemed to focus mainly on geometry, in the ’70s it was colour that took on a central role in his work, with a simplification of the geometry in fluctuating rectangular figures, such as the works XXIV (1976) and XXX (1979); but this shift reveals how decisive colour was for the artist in his previous research. In the ’80s and ’90s the dynamic energy of a serpentine pictorial mark arises, as can be observed in the paintings exhibited in 1990, or an angular one, from 1995, which spreads out to the surrounding area in works like Struttura (1995), a free-standing, three-dimensional work. After taking part in the Venice Biennale in 1986 with two sculptures, an important synthesis comes with the anthological exhibition at the Museo Revoltella in Trieste in 1997 and, in 1998, the personal show at the Esslinger Kunstverein, Villa Merkel in Esslingen, Germany.
In the new millennium Ciussi’s work starts out again – though in a radically new form, driven by all the years devoted to the study of colour and the analysis of pictorial instruments – the off-centre squares that appeared in the 1965 paintings, as in Senza titolo of 2005, which also belongs to the Fondazione Ghisla collection.
At the start of the 2000s big anthological and retrospective exhibitions followed one upon the other, both in Italy and abroad. Important exhibitions are held in 2005 at the Palazzo Isimbardi in Milan, at the historical Palazzo dei Sette in Orvieto in 2007 and, in 2009, in Germany, at the Neuer Kunstverein in Aschaffenburg, and in Austria, at the Stadtgalerien in Klagenfurt. In the same year Ciussi was invited to show his works at the exhibition Temi & Variazioni at Venice’s Peggy Guggenheim Collection, while previously he had already exhibited a large sculpture in Piazza della Scala, Milan, in 2005.
Lastly, his research extended to a study on filling the squares themselves, in the “Senza titolo” series of 2009, or scratching the surface of the painting in the latest works in 2011 and 2012, presented for the first time at the anthological exhibition at the Museo d’Arte Moderna e Contemporanea at Casa Cavazzini, in Udine.

A bilingual catalogue will be published on the occasion of the exhibition containing reproductions of the works on display, an essay by Davide Mogetta and an updated bio-bibliographic section.

ENTRY IS SUBJECT TO THE SAFETY PROTOCOLS FOR CONTRASTING AND CONTAINING THE COVID-19 VIRUS.

The Fondazione Ghisla Art Collection, a no-profit body, was set up in April 2014, for the purpose of making an artistic heritage of international importance available to the community, to be shared by all those who acknowledge the lasting value of art.

The collection was created by the Ghisla husband-and-wife couple, inspired by a growing and eclectic passion for artistic expression. The headquarters occupy a futuristic-style building, built according to drawings by the architectural agency Moro & Moro of Locarno, and is situated at the city centre, a few metres from the tourist port.
In 2022, in the first of the six rooms in the iconic red cube, is presented a selection of works belonging to Martine and Pierino Ghisla’s modern and contemporary art collection. As always the itinerary does not follow a strict chronological order or a sub-division into movements or trends; instead the visitor is immersed in the masterpieces of Pop Art, Informal, Conceptual, Abstract Art and New Dada. The second floor of the Foundation houses the permanent collection, including important works by Pablo Picasso, René Magritte, Joan Mirò, Roy Lichtenstein, Christo & Jeanne-Claude, Jean-Michel Basquiat, Cy Twombly, Agostino Bonalumi, Lucio Fontana, Fernando Botero.
As happens each year, the exhibition is completed by the presentation of a few interesting works, alternating annually, amongst which are prominent the names of the Americans Robert Kushner and Allan McCollum, the Japanese Tadashi Kawamata, the Belgians Maurice Wykaert and Georges Collignon, the Frenchman Jean Miotte, the Swiss artist Urs Lüthi and the Italians Piero Dorazio and Giuseppe Penone.
True to their principal mission - that of sharing artistic works with others - in its rooms the Fondazione Ghisla Art Collection also organises various activities inspired by and linked to the works on display. During the open season, from March to December, it is thus possible to enjoy dance performances and concerts that dialogue directly with the works on display. Special attention is also paid to cultural mediation, both by offering teaching programmes that can be adapted to different ages, school curricula and children, and by presenting the opportunity to visit the collections accompanied by an audioguide in Italian, German, English and French, included in the entrance fee, and by organised visits by appointment, in four languages. The visits presented by Mr. Ghisla himself with such openness and passion are highly appreciated, as he tells the story of the works through the eyes of the collectionist.