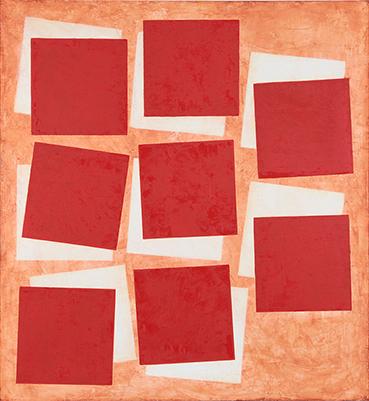 In collaboration with the Archivio Carlo Ciussi and the Fondazione Ado Furlan, the Comune di Pordenone is putting on an exhibition entitled Carlo Ciussi: Painting as Humanity at its Purest, curated by Francesca Pola, in the spaces of the Civica Galleria Harry Bertoia in Pordenone.

Carlo Cussi (Udine, 1930-2012) is one of the leading figures of twentieth-century Italian art. He has left us images of intense, vibrant essentiality, which appear before us as expressions of humanity in its purest form. Ciussi interpreted art as an active vision of the world, as the physical essence of a thought that accepts neither the neutrality of content nor the decoration of form. He saw it as a possible positive vision of reality, constantly recreating new spaces for human expression. This paradox is at the heart of his work, which is deliberately designed not to be classifiable along the lines of current models or pre-established canons, but rather as an inexorable and inexhaustible transformation of the universe: giving body to thought as a means to interpret the world. Without describing it, but rather recreating it, in an incessant process that endlessly derives from existence itself.

The exhibition is the first museum retrospective devoted to the artist in Italy since he died. Conceived by Francesca Pola in close relation to its setting, it includes 40 works that actively interact with the architecture of the Palazzo Spelladi, which is home to the Civica Galleria Harry Bertoia.
The exhibition takes us on a journey through Ciussi’s work, starting in 1964, the year when he had his first significant showing at the International Art Exhibition of La Biennale di Venezia, all the way to his last works, by way of some crucial moments in his international career, including the solo show at the Galerie Paul Facchetti in Paris and his participation in the São Paulo Biennial in Brazil in 1967.
In his painting, Ciussi always used colour to recreate the intimate structure of man and the world, creating a form of painting that constructed a new reality rather than simply recording natural images or emotional impulses. His highly personal forms of expression make him very much a part of the currents of his time, including Abstract Art, Minimalism, and Op Art, but with a crucial distinction, which for him was always colour as an element of structuring sensitivity. The geometricised colour in Ciussi’s work is not somehow detached from reality, but rather the means by which he gives material form to the intimate and emotional structure of man and the world: in the 1960s, by means of a square that unfolds on the surfaces, multiplies, and then intertwines with a circle, overlapping and permutating; in the 1970s, by adopting characteristic rectangular shapes inserted within each other; in the 1980s and 1990s, in the form of the dynamic energy of a serpentine or angular pictorial element that ultimately invades the environment around it. The dissemination of the element is the trace of a gesture, though this is not pure subjective expressiveness, but rather a means by which Ciussi objectively records the transformation of the world and of our experience of it through the medium of painting. This can also be seen in his more extreme works, in which colour emerges from scratches and stratifications of a poignant and yet also vibrant emotional intensity.
The film on Carlo Ciussi made by V!dee and directed by Bruno Mercuri in 2011 is shown in the video room.

A bilingual monograph by Francesca Pola is being published on the occasion of the exhibition: drawing on an extensive, in-depth study of Ciussi’s work, it offers a broad overview of his work with an international vision, with hundreds of images of paintings, sculptures, historical photographs and documents, as well as a selection of the artist’s writings and of the critical essays that accompanied his career, as well as an updated bio-bibliographic section.