Gianni Asdrubali. Surfing with the Alien 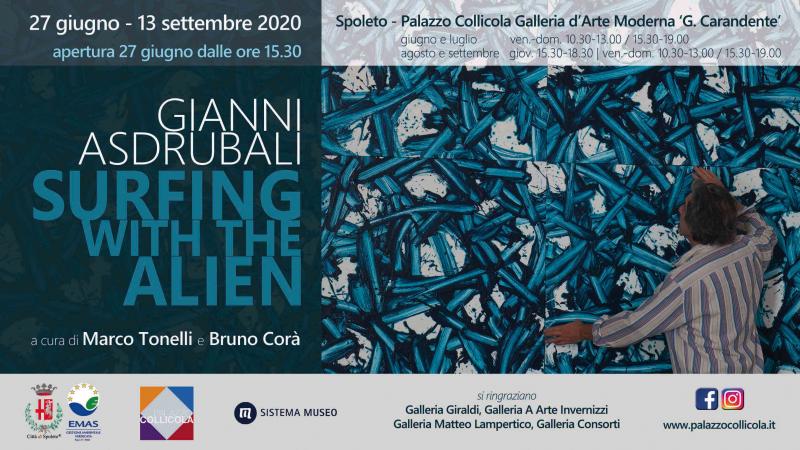 GIANNI ASDRUBALI. SURFING WITH THE ALIEN

After almost 25 years, Gianni Asdrubali (Tuscania, 1955) returns as a protagonist in a solo exhibition in Spoleto, which takes stock of the work of one of the most interesting painter of the Italian art. Starting from the 80s, the artist distinguished himself on the national and international scene as an innovator of the abstract, aniconic and action research.
The exhibition, curated by Marco Tonelli (Director of Palazzo Collicola) and Bruno Corà (President of the Fondazione Palazzo Albizzini Collezione Burri and member of the Comitato Scientifico of Palazzo Collicola), is a retrospektive of the artist’s work through the cycles of his most representative paintings with enigmatic and suggestive titles such as Aggroblanda, Trigombo, Malumazac, Zeimekke, Azota, Stoide, Azotrumbo, Tromboloide.
Scheduled for March, 21st and postponed due to the Covid-19 emergency and the consequently closing of the museums, the exhibition announces the reopening of Palazzo Collicola and of its activities, even if with some changes to the program.
Surfing with the Alien (title of one of the most famous song of the virtuoso and brilliant american guitarist Joe Satriani), aims to communicate the unstable equilibrium, the whirling jumps and the acrobatic leaps in the void of a dynamic painting. This painting seems to fluctuate in the dimensions of the space, creating new plots and unexpected trajectories.
As the artist wrote:”surfing is the action generated by the absence. But this surfing isn’t simple but in opposition, it’s a bumping, it’s an escaping, a leave away to then come back and hit on its own beginning. But everytime it comes back and hits on itself, it warps and opens the structure, transforming the ‘figure’ of the image, that it is never the same. The interaction is the figure of this battle, of this conflict between the surfing and the alien”.
Is an extreme image that of Asdrubali, an artist who the critic Filiberto Menna included in the Astrazione povera group, Flavio Caroli in the one of Magico primario and who Giovanni Carandente invited to the Venice Biennale in 1988.
At Palazzo Collicola, the exhibition runs through the rooms of the ground floor, where once there was installed the permanent collection of the Galleria d’Arte Moderna (since 2019 rearranged at the second floor of the museum). The collection of the museum hosts two works by Asdrubali, including an extraordinary Tromboloide of 1992. It is exactly on this work that it has been created an interactive project, ZUMBER, from the research group ORAMIDE, available soon on the museum website www.palazzocollicola.it.

The exhibition will open to the public from 27 June to 13 September 2020 and it has been realised in collaboration with the Galleria Giraldi, the A arte Invernizzi gallery, the Matteo Lampertico gallery, and the Galleria Consorti. During the exhibition will be published a catalogue, with texts by Marco Tonelli, Bruno Corà and an interview to the artist by Davide Silvioli.