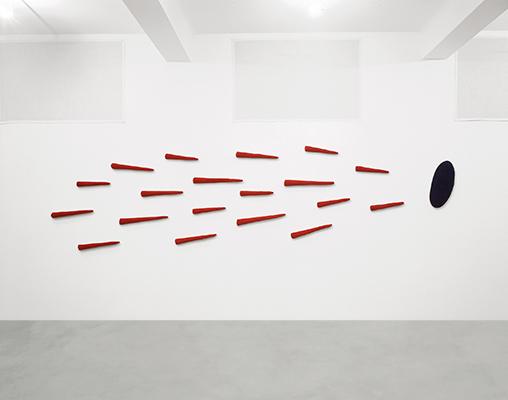 The A arte Invernizzi gallery presents, on Thursday 20 February 2020 at 6.30 p.m., a solo exhibition by Pino Pinelli. Created especially for the gallery’s space, the project includes works that highlight the desire to experiment with materials and supports, as well as the distinctive choice of chromatic reduction, that has guided the artist’s research ever since the 1970s.

The "Pitture" ["Paints"] (1987) on display in the first and second room on the upper floor guide the visitor on a journey with a defined and yet open rhythm, in which the paint emerges as an entity freed from the constraints of the canvas support. These works are the natural evolution of an artistic investigation that started in the 1970s. Already in the monochromes made between 1973 and 1975, some of which are on show on the upper floor of the gallery, Pinelli goes against any expectation of uniformity in the painted surface and atomises the colour by spraying it onto the canvas with an airbrush. In these works, the space taken up by the paint expands out from the centre until it covers the entire surface, which becomes the real area of action and no longer just the place of its representation. In the second half of the 1970s, the process of undermining the traditional support led to a real shattering and fragmentation of the unity of the canvas. Pinelli started creating new support-shapes covered with painted fabric in which colour became body, and a real physical presence immersed in space.

In his “Pitture”, the relationship between the elements and the surrounding environment became both a spatial and a perceptive investigation, as we see in the works on display on the lower floor of the gallery. Each fragment creates a different dynamism with regard to the surface involved and, in its entirety, the work creates allusive trends, traces, and trails. As Giorgio Verzotti writes: “the paint becomes a sign of spatial relations, the function of a spatial investigation that energises the surfaces affected by the intervention, creating trails and trends, indicating directions, alluding to margins and confines, and thus also to virtual fragmentation and environmental realignments. [...] However, an above-and-beyond that is only evoked is counter-balanced by a here-and-now that is greatly emphasised by the role it plays in the meaning. This is a clear right from the outset, with the creation of a painting that exchanges some of its key features with sculpture. The outcome of a concrete form of action (thinking is doing, and doing is thinking is to some extent the artist’s motto), the painted work is suspended in the ambiguous dimension of a bas-relief, on the borderline between two canonical identities. On the other hand, the opening up to space does not, and cannot, come about solely on a two-dimensional plane. The paint has its own plastic form, which is confirmed by the structural activities it is based on, which offers itself to our perception.”

On the occasion of the exhibition a bilingual volume with an essay by Giorgio Verzotti will be published. It will include iconographic and bibliographic material that retraces the painter’s works over the years in collaboration with A arte Invernizzi, both at the gallery and in public and private spaces.

EXHIBITION: PINO PINELLI. FRAMMENTITÀCATALOGUE WITH AN ESSAY BY: GIORGIO VERZOTTIEXHIBITION PERIOD: 20 FEBRUARY - 6 MAY 2020