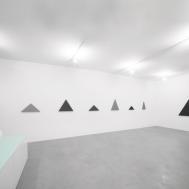 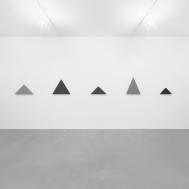 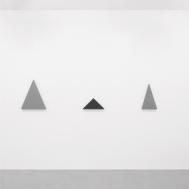 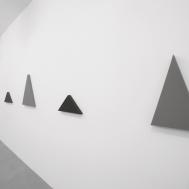 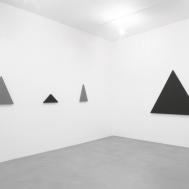 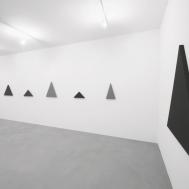 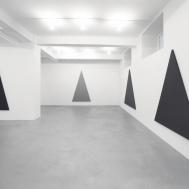 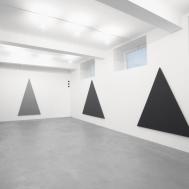 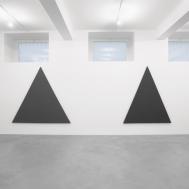 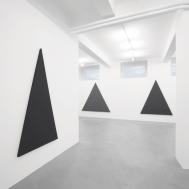 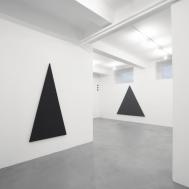 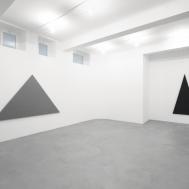 The A arte Invernizzi gallery will open on Thursday 8 May 2014 a solo exhibition of the English artist Alan Charlton who has specifically ideated an exhibition plan based on the relative gallery spaces.
In his own words - "I am an artist who makes a grey painting" - Alan Charlton has since 1969 investigated the different potentialities of grey monochromes, placing them in relation to the surrounding environment together with heterogeneous modulations of light.
For this occasion the artist exhibited works which continue a course begun with the Pyramid Grid Paintings and the Triangle Grid Paintings presented in the gallery in his one-man exhibition of 2011: in those works the canvases in a rectangular format were arranged according to orthogonal directrices in order to define pyramidal forms that here become triangular archetypes, no longer suggested but defined and complete in their own right.
Small triangle canvases were exhibited on the upper floor of the gallery, each having a different colour of grey. The desire for investigation and knowledge, pursued with artistic and rational coherence, draws greater force from the dialogue with the large works exhibited on the gallery's lower floor: triangular monochromes characterised by a preponderant physicalness.

On the occasion of the exhibition a catalogue has been published with the reproductions of the works on show, an interview with the artist by Daria Ghirardini, a poem by Carlo Invernizzi and bio-bibliographical notes.