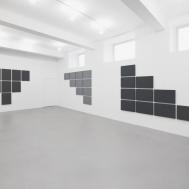 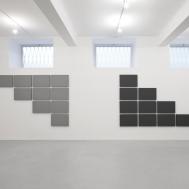 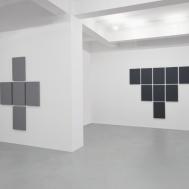 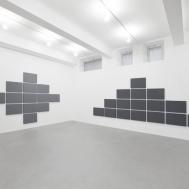 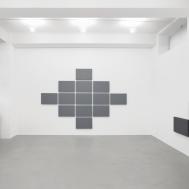 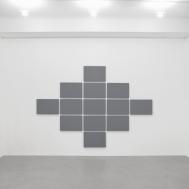 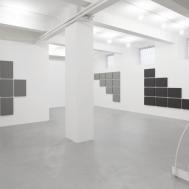 On Thursday 19 May, the A arte Studio Invernizzi gallery opened an exhibition devoted to a new project by Alan Charlton (Sheffield, 1948).
Since the 1960s, the English artist has been using grey as his sole colour and monochrome rendering as the only way in which he employs it: “I am an artist who makes a grey painting”, says Charlton. His works are a radical zero-resetting of all expressive traits and he reduces the entire system of painting to this element, and his entire artistic repertory to this single option. Following few but precise rules that he has given himself, and with which he relates to the spaces he works in, he modulates his painting with different tonalities of grey.
The exhibition included 12 collages on the upper floor of the gallery, which refer to works that can be seen on the floor below.
“There is a set of 63 canvases, each of which measures 45x61,5 cm, arranged in six different ways, thus forming six separate works, each with its own tone of grey. When we look at all the works together, what is so striking is their great physicality. Their autonomy, absolute lack of any referentialism, strict consistency, and the way they impose themselves on the eye of the viewer all creates an enigmatic atmosphere that becomes all the more elusive the more one tries to pin it down.”

On this occasion a catalogue with illustrations of the works on show and up-to-date biographical and bibliographical notes has been published.