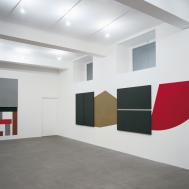 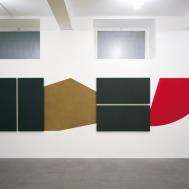 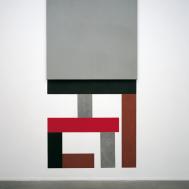 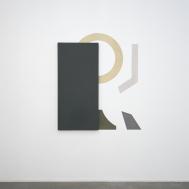 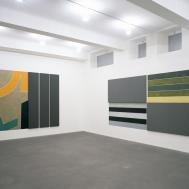 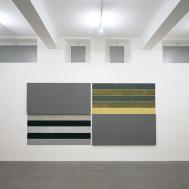 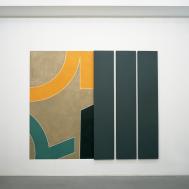 On Thursday 20 January 2005, A arte Studio Invernizzi presented an exhibition of Alan Charlton and David Tremlett, who created together a new series of joined pieces, realized in a direct and specific connection with the space of the gallery.
This occasion will see the integration of two strongly characterized languages: the subtle emanation, iteration, modularity of Charlton’s pulsating grey monochrome canvas will interact with the chromatic explosions of Tremlett’s works, realized directly on the wall, spreading the colour by hand. Once more, both artists will work to acquire an awareness of the phenomenal and corporeal space of the gallery, in a perspective which is not purely proportional, and opens a the path to an identification with the germinal moment of making, translated into images of strong visual impact and powerful evocative suggestion.
In this dialectic between monochrome and polychrome, erasing and underlining the operative aspect, regularity and organicity of forms, strict iteration and enlarged temporality, Charlton and Tremlett confirm the potential affinities of their artistic courses, without denying the reciprocal acknowledgement of their specifical identities.
On the occasion of the exhibition, a bilingual catalogue has been published, including the reproduction of 50 collages realized by the two artists in the past few years, the images of their exhibitions in Paris, Berlin and Milan, a conversation between the two artists edited by Francesca Pola, a poem by Carlo Invernizzi and bio-bibliographical notes.