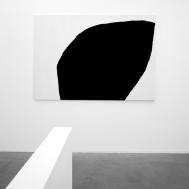 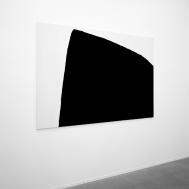 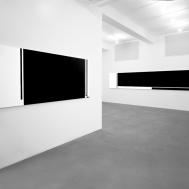 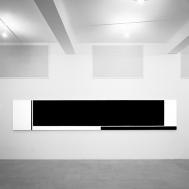 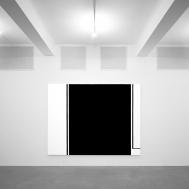 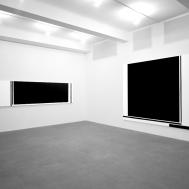 On Thursday 21 March 2002 A arte Studio Invernizzi presented a solo exhibition of Bruno Querci, who on this occasion created a new series of works purposely conceived for the space of the gallery.
“After overcoming the initial articulation of the stylistic elements, the artist identified the foundations of the image in the relationship between the visible and invisible and introduced not only the void in relation to the solid, but also, and most importantly, the sense of exteriority, the role of the wall and the spatial tension deriving from the location of the surface of the picture in the environment. (...)
The conception of painting as a dialogue with infinity also means increasing the possibility that the matter-light will be active beyond the appearance of the forms, with the need to feel the tactile value of the pigment in an ever-changing way: the thick layers that are such, even though the last stage of the colour does not seem to make them visible.
Infinity cannot be represented, described or quantified: for this very reason it cannot be separated from the colour-light that gives it substance and by the perception of the concrete nature of the invisible. Attaining its dimension means placing oneself at an unlimited point, being in the space-time of painting with one’s body-mind and going back to the origins, the archaic period and the primary value of language. (...)
While in the 1990s the artist no longer worked on light as an explicative tool of form, but within its energetic outpouring, he now brings space within the potentiality for light of form and does not delimit the work from the outside, but makes it visible through its internal matrix”. This is what Claudio Cerritelli writes in the bilingual catalogue published on the occasion of the exhibition, which includes also images of the works installed in the gallery, a bio-bibliographical note and a poem by Carlo Invernizzi.