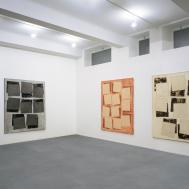 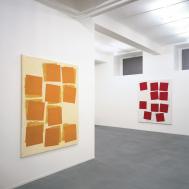 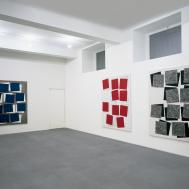 On Thursday 15 September 2005, A arte Studio Invernizzi and Lorenzelli Arte, in cooperation with the Provincia di Milano have contemporaneously presented three exhibitions of Carlo Ciussi.
Both galleries have presented works of the last creative cycle of the artist in which Ciussi continues with the opening of his image to new horizons of sense through the presentation of an inedited declension of his painting.
Paintings, as curator Francesco Tedeschi writes, “take shape rather as ‘signs’ that become figures or forms that appear to be inspired by a principle of stability and are put to the test of continuous variability of position, harmony and destination in space. Thus they are hypotheses for writing, space, equilibrium and movement at the same time, screens and images, forms and functions”.

At Palazzo Isimbardi has been presented an iron sculpture of big dimensions.
For Ciussi, the making of sculptural works is the natural evolution of a concrete thought in which the forms created on the surface become animated and have a dialogue with the surrounding open space. In contrast with his painting, his sculpture underlines the tension towards infinite...the superimposition of elements and the internal movement reflecting a vitality that is always active in their conception mean that his works in iron or steel tend to express a sense of evolution rather than solidity”.

On the occasion of the exhibition, a bilingual catalogue has been published, including a critical essay by Francesco Tedeschi, the reproduction of the works exhibited in the expository spaces, a poem by Carlo Invernizzi and bio-bibliographical notes.