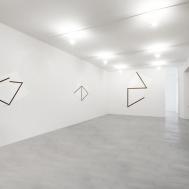 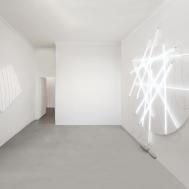 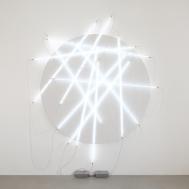 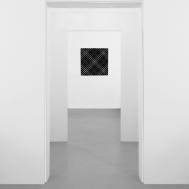 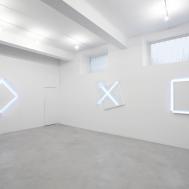 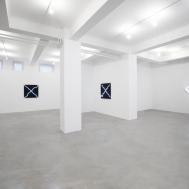 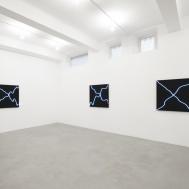 On Thursday 8 March 2012 a solo exhibition of works by the French artist François Morellet opened at A arte Studio Invernizzi.
After the exhibition he put on at the Centre Pompidou in Paris in May 2011, the artist presented in the gallery “works belonging to different time cycles, yet again rigorously planned in relation to the specific characteristics of the exhibition space with a play of calibrated equilibriums. A play which although renewing itself never loses the fascination with the unforeseeable and unexpected. In the first room on the gallery's upper floor we find four large works of the series entitled “Cloneries”, produced in the middle of the 1990s with acrylic and rust on sheet metal.
'Disarticulations' of vectorial lines join the superimposed surfaces by way of diverse coupling dynamics, alternate anchorings of the eye attracted by the acute ambivalences of the path it has to take. The title strengthens the estrangement of the double meanings, it annuls the secrets of the spatial vertigo with which the artist knows how to be ironic and cutting, almost making fun of what takes place within the plastic-linear orbit of the works.
In the second room on the upper floor one has the energetic charge of Lunatic weeping and neonly n° 3, dated 2010, a rhythmical orchestration of neon tubes which create a dense interlacing of straight lines inside the large circular canvas with points of simultaneous straying beyond the limits that include all directions, following the instable emanation of polysensorial gleamings.
Our visit to the first floor ends with four works. Firstly there is the comparison between two works on wooden panels dated 1969, structured meshes with variations in the chromatic incisiveness of the small modular squares and two recent works, the first conceived as the detail of lines undergoing curvature while the second is based on the superimposition of the circle on the square with the lines of white neon that accentuate the copresence of the curve and the angle on the opposite sides of the surface.
The seven works on canvas and neon rhythmically arranged along the walls of the gallery's ground floor all belong to the cycles created in 2011: “2+4 angles droits”, “Diagonales hors cadre” and “Mal barrés”. Here we have a choice of works that are functional regarding the overall sense of Morellet's present-day research, exemplary phases of his way of working by means of intuitive synthesis of contrasting space-time coordinates. It is not possible to separate the analytical components of the form from the sensorial contents that arise from the structure, setting free something different, other mental fluxes that extend the perimeters of the visible”. (Claudio Cerritelli)

On the occasion of the exhibition a bilingual catalogue has been published with reproductions of the works on show, an introductory essay by Claudio Cerritelli, a poem by Carlo Invernizzi, and up-to-date biographical and bibliographical notes.