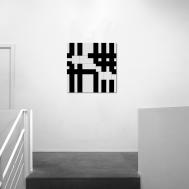 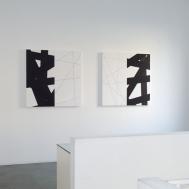 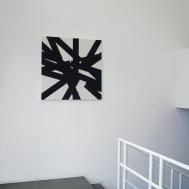 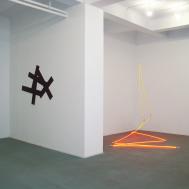 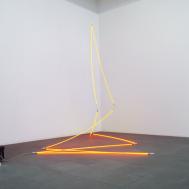 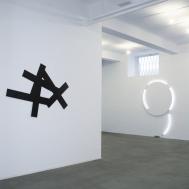 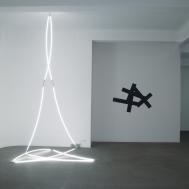 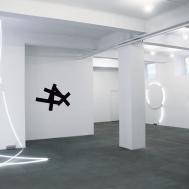 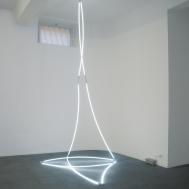 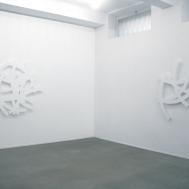 On Thursday 15 December 2005, A arte Studio Invernizzi presented an exhibition of François Morellet’s recent works, in which the scansion of space according to dynamics of vision, typical of Morellet’s theorical approach, is joined to imaginative freedom.
François Morellet’s art is generated by the interweaving of great systematic rigour with inexhaustible curiosity and his attentive and demystifying approach to experimentation. This is the result of the artist’s remarkable irony, which is evident both in his formal and stylistic hybridization and in the way he ‘disguises’ geometry with reality.
Representative works of the last creative series titled Cross crash, Décrochage, Strip-teasing, Lamentable, Twin strip-teasing, π Strip-teasing have been exhibited.
“By making use of different materials for the creation of the image, François Morellet is operating on two levels at the same time. The natural component does not merely have a value as an object, since it is a structural part of the work, a constitutive element that, at the same time, destabilizes its geometric rigour.
Geometry is also disguised in the neon works: the reciprocal orientations of the various parts are regulated according to mathematical measurements and angles, which are recognizable in an overall dimension of relative instability involving the reawakening of attention in a silent setting - the neutral surface of the wall or canvas.
The optical and physical shifting focuses attention on the perceptive potential: the materials used are equivalent and the forms become totally independent of them, while displacement constitutes the duplication of the image in its physical reality. The illusionism that has been discovered and then cancelled with all its conspicuousness becomes explicit disguise.”
On the occasion of the exhibition, a bilingual catalogue has been published, including a dialogue between François Morellet and Epicarmo Invernizzi, the images of the works installed in the gallery, a poem by Carlo Invernizzi and bio-bibliographical notes.