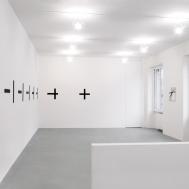 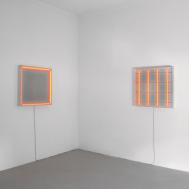 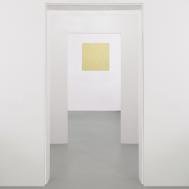 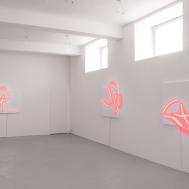 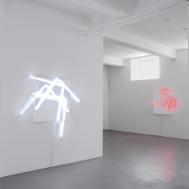 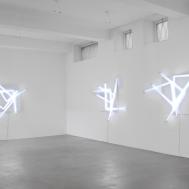 On 19 March 2009, an exhibition of works by the French artist François Morellet will open at the A arte Studio Invernizzi gallery.
The exhibition - which took place in the gallery’s enlarged and renovated premises - was centre around a group of important works reflecting the artist’s most recent output and designed in relation to the exhibition space.
In order to stress the close relationship of the works with their setting, Morellet also created a site-specific intervention in the large new exhibition room on the mezzanine floor: the spatial dimension and physical and perceptive involvement of the spectator as part of the surroundings, of which he or she experiences a special and specific moment, are crucial aspects of his poetic practice.
The forms and balances of Morellet’s interventions always involve a variety of elements, such as the graphic sign, sculpture, painting and installation, and are founded on rational and cognitive systems that are the basis for their coming into being and construction.
The rationality of their development is grafted onto the emotivity of the particular moment when they are observed: the works are formed in space as a means for capturing the energy that pervades the surroundings, never failing to open themselves up to emotivity that is entirely free and varies with the endless coming into being of time.
Created from 1963 onwards, Morellet’s neon works are a means for inscribing his forms - now consisting of vital light - more forcefully in the occurrence of events. The artist’s approach to life - allowing him to create a vibrant and dialogical relationship with it - involves participation in the events of the world and their coming into being, which takes the form of specific and always unique fragments.
Works representative of Morellet’s output from the 1950s to the 80s have been on display in the gallery’s other spaces.

François Morellet exhibited at the A arte Studio Invernizzi gallery in 1994 (with Dadamaino and Günther Uecker), and has also had shows here with specific interventions in 1997, 2000 and 2005.

On the occasion of the exhibition, a bilingual catalogue has been published with reproductions of the works, an introductory essay by Luca Massimo Barbero, a poem by Carlo Invernizzi and up-to-date biographical and bibliographical notes.