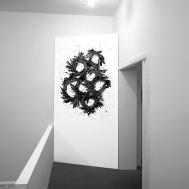 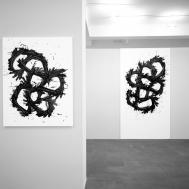 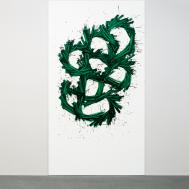 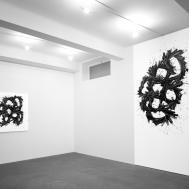 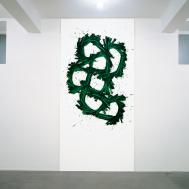 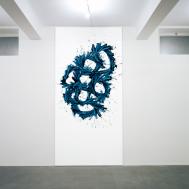 On Tuesday 2 October 2003, A arte Studio Invernizzi presented a solo exhibition of Gianni Asdrubali’s.
The original and new pieces, titled "Azota", testify Asdrubali’s work as an extreme tension between structuration and dynamic destructuration of the body of emptiness, having their distinctive expression in the synthetic image of a moment as figure of the contradiction of its own sense.

Gianni Asdrubali, born in Tuscania in 1955, emerges in the early Eighties featuring a research exactly opposite to the expressive rules of his age.
In 1982 Asdrubali takes part in the exhibition "Lapsus" at Galleria La Salita in Rome; in 1984 he presents his first solo exhibition at Galleria Artra in Milan.
In 1985 he is invited by Flavio Caroli to the exhibition "Anniottanta" at the Galleria d'arte Moderna in Bologna; in 1986 he takes part in the exhibition "Il meno è il più", curator Filiberto Menna, at La Salerniana in Erice.
In 1988 Asdrubali is invited to the exhibition "Schlaf der Vernunft" at Museum Fridericianum in Kassel, and also to the "Australian Biennale" in Sidney and to "Aperto '88" at the Venice Biennale.
In 1996 Asdrubali - with the painters Bruno Querci and Nelio Sonego and the poet Carlo Invernizzi - subscribe the manifesto "Tromboloide e disquarciata. Natura Naturans", participating to the homonymous exhibition at Centro Espositivo della Rocca Paolina in Perugia, then at Galerie Nothburga in Innsbruck and at Museum Rabalderhaus in Schwaz.
In 1999 he is invited to the exhibition "Arte italiana. Ultimi quarant'anni. Pittura aniconica" at the Galleria d'arte Moderna in Bologna and in 2000 to the travelling exhibition "Zwischen Figur und Körper. Aspekte der Italienischen Kunst der Nachkriegszeit" at Städtische Galerie in Rosenheim, at Musei Civici Villa Manzoni in Lecco and at Städtische Galerie Villa Zanders in Bergisch Gladbach.
In 2001 the Institut Matildenhöhe in Darmstadt presents an important retrospective of  his work.

On the occasion of the exhibition, a bilingual catalogue has been published, including a dialogue between the artist and Pamela Ferri, the images of the works installed in the gallery, a poem by Carlo Invernizzi and a bio-bibliographical notes.