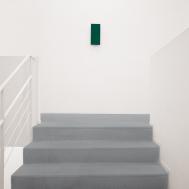 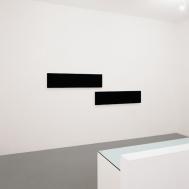 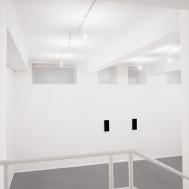 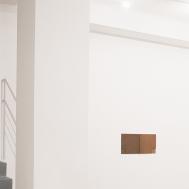 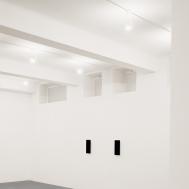 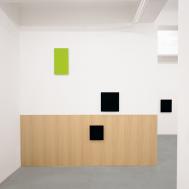 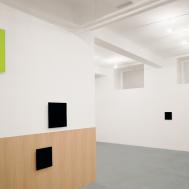 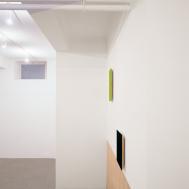 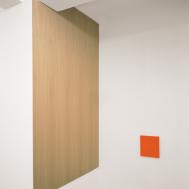 A arte Studio Invernizzi gallery presented on Tuesday 4 March 2008 a solo exhibition of the German artist Günter Umberg.
After his exhibitions presented at the Städtische Galerie Karlsruhe and at the Haus Konstruktiv in Zurich, Günter Umberg presented recent seminal pieces conceived in direct connection with the space of the gallery.
“Günter Umberg often pays special attention not only to relating the work to the exhibition space, but also to the way it relates to the wall where it is displayed.
In a number of close-ups we can see how the picture is attached to metal hooks that distance it from the wall, causing it to be tilted. Other shots dwell on the sides of the works, which are often raised because the picture consists of a thick wooden base to which the paint is applied. Thus the artist allows us to sense the materiality of the work, its physicalness, its existence as a thing among concrete things and the relationship it creates with real space. We see how the picture becomes materially part of the wall and how it protrudes from it. In metaphorical terms, we could say that the work possesses energy that emanates from its body until it is shifted from the flat dimension of the wall and is driven towards space, changing the very characteristics of its setting.
We know, in fact, that Umberg does not hesitate to change the morphology of the exhibition rooms, getting walls to be added, smaller rooms to be built in the existing ones, or walls to be placed diagonally, thus diverting entrance through a door. He also covers areas of the walls with a surface of light wood so that they actively interact with the colour of the pictures placed above, or under, or beside them. This great freedom in the arrangement of the space and the positioning of the works is the result of this concept of the picture as the centre of radiating energy and the driving force behind spatial relations, whether they be effective, realized, tangible or purely virtual.
Whether hanging low down, high up, on its own or in a pair or series, projecting or flat, the picture seeks a meaningful encounter with the spectator that takes place at a psychophysical level, not just a mental one.”

On the occasion of the exhibition, a bilingual catalogue, including an introductory essay by Giorgio Verzotti, the images of the works on display, a poem by Carlo Invernizzi and bio-bibliographical notes has been published.