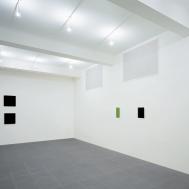 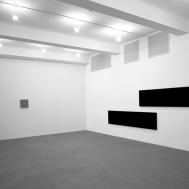 A arte Studio Invernizzi, in cooperation with Goethe Institut Inter Nationes Mailand, presented a solo exhibition of Günter Umberg’s work, opening on Tuesday 22 May.
The German artist, born in Bonn in 1942, has been working over several decades on a very personal creative line: on this occasion, he created a series of works purposely conceived for the space of the gallery.
“Without any subordination to the environment, but provoking systematically its configuration and apparent ‘normality’, painting assumes an exposed position that does not leave the viewer any choice, but obliges him to find his way by himself (...) between two different fields of reality, of which painting, in its lapidary monochromy, is the new beginning: a beginning that Malevic or Reinhardt meant without running across, without wishing it, layer after layer, surface after surface, running across it in illusoriness and in substance.
This is the reason why it is ridiculous and inadequate to speak about abstraction and monochromy concerning Günter Umberg’s painting. Because, through more than thirty years of constant, insisted, perhaps tireless work, the artist has been patiently elaborating an exceptional skill in foreboding the threshold and placing it concretely in the centre of a reality which only the viewer’s appearing has the power to reveal in experience. In actual fact. In esser-ci.” Martina Corgnati writes in the bilingual catalogue, which includes also an iconographic documentation and a bio-bibliographic apparatus.