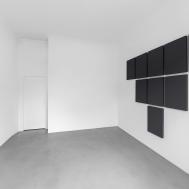 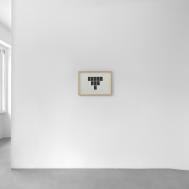 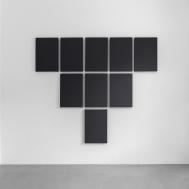 The A arte Invernizzi gallery opened on Wednesday, 1 July 2020, from 3 to 8 p.m. Alan Charlton. The Breath of the Boundary, the first in a series of exhibitions entitled Becoming: Idea to Image in Contemporary Art.

How can we interpret and define the conception of a work, the idea of an image, in today’s augmented dimension of our daily activities and creative undertakings? Does a project still have an autonomy and meaning of its own in the distracted, participatory immersiveness of our post-digital world? How can we rethink and redefine this relationship in view of the uncharted coordinates of spacetime and experience that we are living in today? In this expanded dimension of the senses and of the mind, what does it mean to project those presences of rejection, interrogation, and thresholds onto the “elsewhere” that are works of art? These exhibitions will attempt to investigate the relationship between the idea and the work in a way that is new and relevant to the contemporary world, by showing both the individual, historical, and contextual specificity of the choices made by individual artists, and the relevancy of their creative developments. In other words, “in becoming” - between what was and what will be. In the making - between idea and image.
On this occasion, Pyramid Grid Painting (2011) has been shown in the upstairs room: this emblematic work helps clarify the relationship between idea and image in Alan Charlton’s art. The work consists of eleven monochrome grey canvases of the same shade, arranged to form an inverted pyramid. It is preceded by a collage project, in which proportionality and colours can be seen to be analogous, whereas its phenomenal and experiential outcome is of an entirely different nature. Answering a question about the role of planning in his work, during a conversation some years ago, Charlton told me with his customarily intense, carefully thought-through spontaneity: “Making a drawing is one thing, but then, when you’ve done it, it becomes a completely different work”. (Francesca Pola)