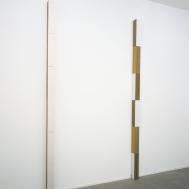 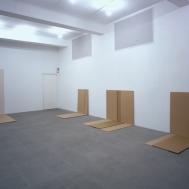 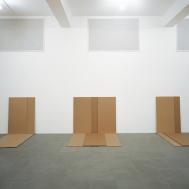 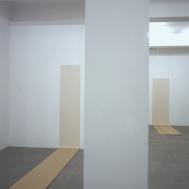 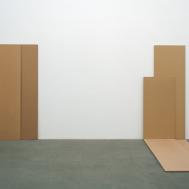 On Thursday 23 May 2002 A arte Studio Invernizzi presented a solo exhibition of the English artist Lesley Foxcroft, who on this occasion showed a new series of works specifically created for the space of the gallery.
During the 90s, Lesley Foxcroft’s work has been developing through pieces realized in flexible materials, which come alive thanks to the undefinable mistery of colour as a solid presence. Her creations interact with the light of the environment, and at the same time emanate a chromatic luminosity which is diffuse and vibrating.
Her recent works, presented in this exhibition, make this characteristic of presence even more evident, in proposing themselves as realities which are more than installations, elements modifying the morphologies of the environments with which they come to a dialogue.
Lesley Foxcroft lives and works in London. She exhibited her work in prestigious international seats, such as the Oxford Museum of Modern Art and the  Van Abbemuseum in Eindhoven. In 1997 the Max Bill Foundation in Zurich presented a solo exhibition of her works.
On the occasion of the exhibtion, a bilingual catalogue has been published, including an essay by the artist, images of the works installed in the gallery, a bio-bibliographical note.