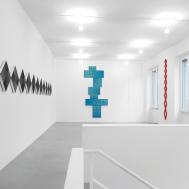 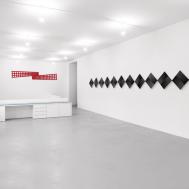 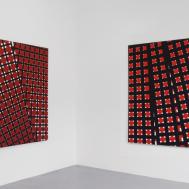 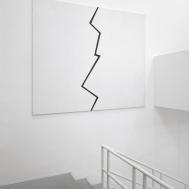 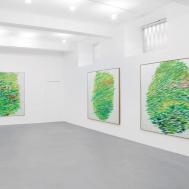 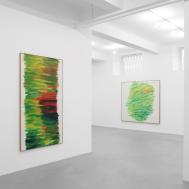 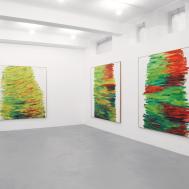 On Thursday 18 March an exhibition opened at A arte Studio Invernizzi featuring sixteen large-format works by Mario Nigro from the ‘spazio totale’ (Total Space) cycle of the 1960s and the ‘ritratti’ (Portraits) and ‘dipinti satanici’ (Satanic Paintings) series of the late 1980s. This will be the first time these works have been displayed together in a private exhibition space.

Thanks to the innovative character of his work, Mario Nigro (b. Pistoia 1917, d. Livorno 1992) was, in the post-war period, a leading exponent not only of Italian art but also of abstract art at an international level. As a result of his background in science (he graduated from the University of Pisa firstly in chemistry, then in pharmacy) and music (he played the violin and piano), he developed a radical artistic style that, although it was based on a totally abstract formal structure determined by the principles of musical rhythm, such as repetition and variation, conveyed a strongly dramatic content charged with intensity that disrupted the Constructivist rules at the origin of his art in order to investigate dialectic tension. The rhythmic structures forming the basis of Nigro’s work are surfaces, lines, grids, and series of signs and colours that are added and subtracted in vigorous, musical harmony.

On display in the exhibition space on A arte Studio Invernizzi’s upper floor were works in which Nigro - replicating the paintings of the ‘spazio totale’ of the 1950s, but in a larger format - articulate their forms by adopting serial modularity that creates three-dimensionality involving the environment.
The work Dallo spazio totale 1954: serie di 12 rombi continui a progressioni ritmiche simultanee alternate opposte of 1965 (From Total Space of 1954: Series of 12 Continuous Rhombi in Simultaneous Alternate Opposing Rhythmic Progressions, 1965) was also displayed in the room devoted to the artist at the 1968 Venice Biennale. Occupying the entire left wall, it is seven metres in length and consists of the horizontal progression of a series of twelve square elements made of painted wood and hanging in a diagonal position; on each of these an opposing structuration is represented.
Also from this cycle is Dallo spazio totale: componibile in 7 pezzi in contrasto simultaneo di progressioni ritmiche (From Total Space: Modular Work in 7 Pieces in Simultaneous Contrast with Rhythmic Progressions), executed in 1965 and often referred to by the artist as Totem, is a work of central importance in this series because it shifted the question of the contrasting structuration from what was still a mainly optical plane to a sculptural one.
Another six paintings from the ‘spazio totale’ cycle have been displayed in the other rooms on the upper floor: in these works, the grids occupy the entire pictorial field and, as they cross the surface, dynamic contrasts create musical rhythms.
In the space located between the two floors of the gallery has been displayed Dallo spazio totale: progressioni ritmiche simultanee opposte of 1966 (From Total Space: Simultaneous Opposing Rhythmic Progressions, 1966), consisting of the transposition of virtual optical grids typical of works on canvas onto two opposing perspective lattices made of wood painted red.

Large works of 1988, belonging to the ‘ritratti’ cycle - including Agamennone (Agamemnon), Euripide (Euripedes) and Ritratto di un dipinto (Portrait of a Painting) - have been on display in the basement room. In these, Nigro painted a central motif freed from the support where the picture expresses its passion and its irresistible and implacable power.
In the works on display in the ‘dipinti satanici’ series - including Lotta, Libertà, Rivoluzione (Struggle, Freedom, Revolution) - Nigro’s painting explodes into vigorous brushstrokes and a linear sequence of vivid patches of colour forming the expressive peak of his musical pictorial synthesis.
On the occasion of the exhibition, a bilingual catalogue has been published containing introductory essays by Serge Lemoine and Francesca Pola, photographs of the works on display, a poem by Carlo Invernizzi and up-to-date biographical and bibliographical notes.