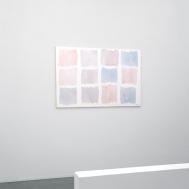 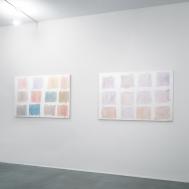 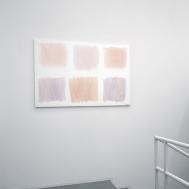 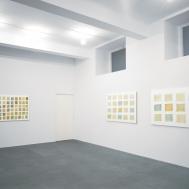 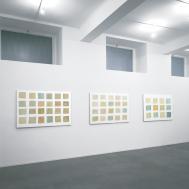 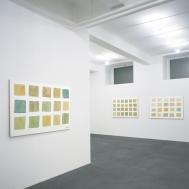 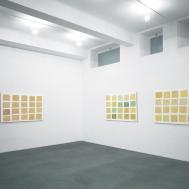 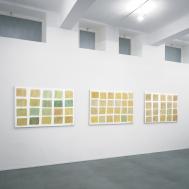 On Thursday 23 March 2006, A arte Studio Invernizzi gallery presented an exhibition of Mario Nigro, in which an important series of work from 1991-1992 titled Meditazioni have been exhibited.
“Mario Nigro’s Meditazioni mark a turning point in the artist’s later output, a change of course after the paintings of the late 1980s. These followed the rupture of the Terremoto (mid-1980s) that introduced breakage and disorder to methodical Nigro, the destructuring aspiration of the drive to the rational constructivist.
The line (...) of the Metafisica del colore (late 1970s), now formed zigzags, then it became horizontal and shattered in the series of dots and patches of colour of Orme (second half of the 1980s). The next phase was the overheated one of the vertical stratifications of brushstrokes named after the devil, no less, in the series entitled Dipinti satanici, a climax reached at the end of the 1980s, against which the artist then felt the need to react. This explains the totally different atmosphere of the Meditazioni, (...) series of squares or rectangles presented as small areas of colour on canvas or paper and created with monochrome strokes of oil paint on canvas or watercolour on paper, inevitably, the former are more dense and compact and the latter more liquid. Always visible as signs of manual skill, the brushstrokes, however, precisely define the geometric form they are intended to represent. Coloured forms are placed in sequence with the didactic allure of a catalogue, with the simple, disarming self-evidence of a repertoire of colour tones: they are basic linguistic elements distinguished by minimal variations.
Brushstrokes of pure, unmixed colour, partially superimposed in some cases, patches juxtaposed with patches and streaks with streaks, seem to be a clear reference to the late work of Monet, who, in a similar way, painted the trunks of his weeping willows, the arch of his Japanese bridge or the paths in his rose garden. (...) Thus the reference to the Impressionists is not meant to imply a stylistic affinity, but rather an ethical similarity, the common will to make painting an instrument of knowledge and reflection with regard to reality, to the world. Nigro, in fact, was concerned with the artist’s social role epitomized by the Impressionists, who were revolutionary both in painting and in their ideological and existential choices (...)” so Giorgio Verzotti writes in the catalogue published on the occasion of the exhibition that includes the reproduction of the works displayed in the gallery, a writing of Mario Nigro and bio-bibliographical notes.

The exhibition was open on the occasion of In Contemporanea, an event organized by the Provincia di Milano.