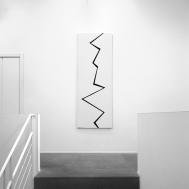 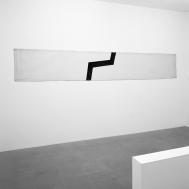 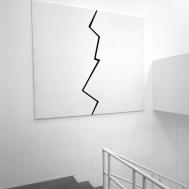 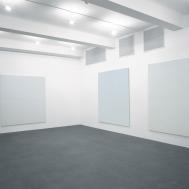 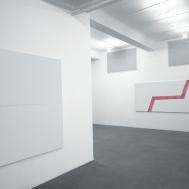 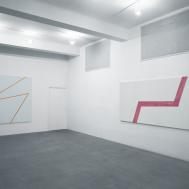 A arte Studio Invernizzi gallery presented a solo exhibition of the artist Mario Nigro (Pistoia 1917 - Livorno 1992), opening on 26 February 2003.
The exhibition wants to document an important moment of his creative activity, including pieces from the early Eighties: the Terremoti (Earthquakes) and the Orizzonti (Horizons).

“Terremoto was still a work with a single line, but it truly was an earthquake ideologically - within me, within my painting in terms of everything I had done before. In the end, I found, free line had no need of constructions, even constructions that vanished. And this line was black, it was a drastic thing. Afterward, my painting became introspective. I resolved the earthquake with lines, but they were broken lines. I think of this period, in the early ’80s, as a time of solitude, because I found myself truly isolated in the world. Then these lines became like horizon lines, and finally they continued on like dots. (...) Hope is always a desire. But I am not interested in hoping for something: I want something. This line continuing as dots, one after the other, lives in space. The background is like an atmosphere. More than colour it is luminosity, almost white. The dots drift within this luminosity. Each dot is a thought.”

Since the late Forties, Mario Nigro has developed a painting based on the calibrated interaction between the two antithetical elements of the real and the existence: the unavoidable need for a rational control and the freedom of expression belonging to the emotional sphere.
The works in the exhibition reflect this dominating character of his whole long artistic course: the continuous confrontation between rationality and passion, which always led him to transgress each solution before it could be transformed into a rule.
On the occasion of the exhibition, a bilingual catalogue has been published, including Antonella Soldaini’s essay, the images of the works installed in the gallery and a bio-bibliographical apparatus.