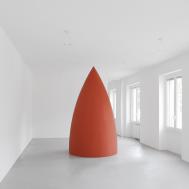 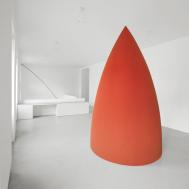 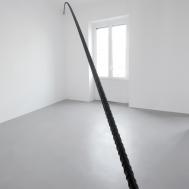 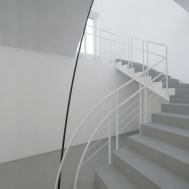 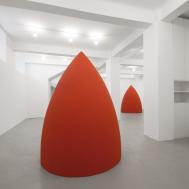 The A arte Studio Invernizzi gallery opened a solo exhibition devoted to the artist Mauro Staccioli on Tuesday 25 September 2012.
After the exhibitions of 1995, for which “the artist emphasised the progression of the lower space with a series of vertical plinths of various colours”, and of 2000 for which he created “a large diagonal element that sliced across the entire length of the lower room”, the sculptor on this occasion has also “created a particular route that aims to accentuate the continuity and traversing of this exhibition space”.
The two floors have been closely correlated with each other from the “first intervention-sculpture one encounters on entering, a large walk-through arch made of iron rods, which connects one of the upper corners of the entrance area to the base of the staircase that leads down to the lower floor. A second, similar arch appears on the upper floor, where it crosses the last exhibition room diagonally.
Accompanying these two interacting works, which are designed to give greater awareness to transit in the upper and lower rooms, Staccioli has created some forms with circular bases with bodies formed out of the intertwining of pointed arches, the respective heights of which are inversely proportional to the sizes of the rooms they are in.
On the upper floor, where the ceiling is lower and the space more intimate, there is only one, more slender shape, emphasising the immediate, organic impact of the spatial experience. On the lower floor, however, where the space is greater in all directions, the shapes are lower and arranged in a way that emphasises the diagonal of the crossing”.
With the works for this exhibition was brought to light a ”component, which we might say is more directly autobiographical and that has led Staccioli to create his intervention-sculptures (...) as ‘lost forms’. The arch and the ‘haystack’ (as he himself has at times referred to these shapes with circular bases) are distilled memories of origin, a sort of verification of his own language in relation to his dimension of genesis”.

On the occasion of the exhibition a bilingual catalogue has been published with reproductions of the works on show, an introductory essay by Francesca Pola, a poem by Carlo Invernizzi, and an up-to-date biographical and bibliographical notes.