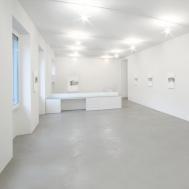 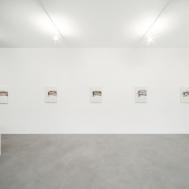 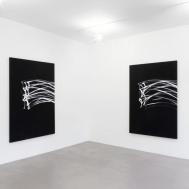 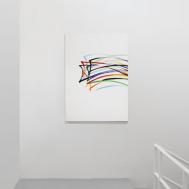 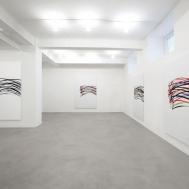 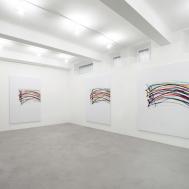 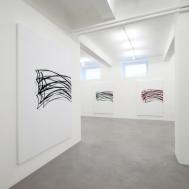 The A arte Invernizzi gallery opened on Thursday 5 December a solo exhibition of the artist Nelio Sonego. The exhibition presented recent works belonging to the ‘Orizzontaleverticale’ cycle and created in relation to the exhibition space.

The traits of manifold colours which the artist creates by spreading acrylic colour with a brush, no longer using aerosol sprays as he did with the works produced in previous years, emerge from their grounds following vertical and horizontal directrixes and extend beyond their own physical limit in order to break the closed and defined limit of the canvas. As Paolo Bolpagni has written, this is “a process of great intensity and concentration that explains the auratic significance of Sonego's sign which is evidenced as a vector, a pure directionality, a demiurgic force, a trajectory not of matter but of energy where sign and colour are identified in a sole unity [...]; in the same way in which the Horizontal and the Vertical - absolute categories by now incarnated within the ‘body’ of the painting - are inextricably fused in a new entity: that of the Orizzontaleverticale.

Exhibited in the first room of the first floor were small works in which the signs of colour are delineated on the white ground support. Following a ‘path’ made up of analogous and contrasting passages with the larger works, also characterized by lines of various colours spread on a white ground, these works hold a dialogue with these larger works found in the gallery's lower room and with the work presented in the second room of the first floor in which the white traces of acrylic are transcribed by Sonego on a black ground.

On the occasion of the exhibition a bilingual catalogue has been published with the reproductions of the works on show, an introductory essay by Paolo Bolpagni, a poem by Carlo Invernizzi and up-to-date biographical and bibliographical notes.