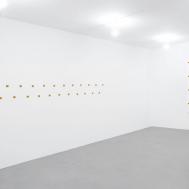 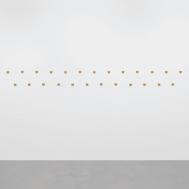 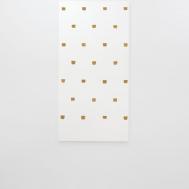 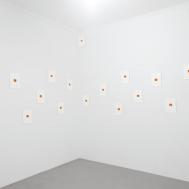 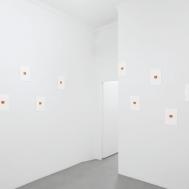 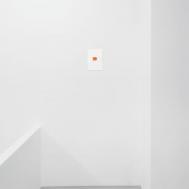 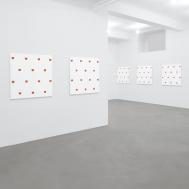 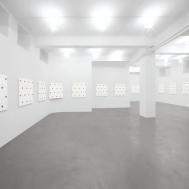 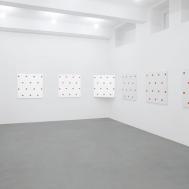 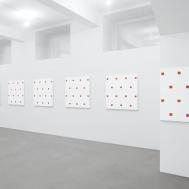 The A arte Invernizzi gallery opened on Thursday 21 February 2019 a solo exhibition of works by Niele Toroni. The exhibition - realised on the occasion of the twenty-five years anniversary of activity of the gallery - exhibited works that enter into a dialogue with the spaces, and it is base on the number twenty-five.

Niele Toroni has been working since 1967 with a precise methodology that involves creating a sequence of imprints on a variety of supports. The imprints are made by a no. 50 brush and 30 cm apart. Each one is the place of an epiphany, revealing a constant metamorphosis of the artist’s action over time.

“Niele Toroni has been repeating his brush imprints in time and space. But it is never the same thing because the same is the same is the same, and it is obstinately dissociated from bring identical. The pleonasm becomes a battery: the energy of iteration and the open structure. It is not the ups and downs of the artist’s soul that are the inhibitors of identity, but rather the places where the method is rendered explicit. Having rid itself of the dead wood of all judgments of value and all historical connivance, the practice of true painting is the constant: it finds the essence of each work by reference to its own essence. The world is not reduced to two dimensions, as would normally be the case in a picture, but painting is a given situation and thus becomes an open structure, freely reconceivable in everything.” (Harald Szeemann, 1991).

On the upper floor a work consisting of twenty-five cards - each with a single brushstroke on it - was installed in the exhibition room in multiples 30 cm apart, guiding us visually in our perception of space as an active field. The exhibition included also two large canvases, some mural works and others on different supports such as posters, Japanese papers and cardboard.

Downstairs, Impronte di pennello n. 50 a intervalli di 30 cm [Imprints of Brush no. 50 at Intervals of 30 cm] of 1987 - a work consisting of twenty-five canvases each measuring 100x100 cm - redefined the exhibition space and gave rhythm to the visitor’s eyes to flow freely across them. This is the result of an almost tantric action, which is never repetition but rather the materialisation of a degree of individuality that is ever-changing and always unique.

The exhibition was accompanied by a bilingual monograph containing an imaginary interview by Niele Toroni and a text by Giorgio Verzotti, accompanied by illustrations that retrace the work the painter has created over the years in collaboration with A arte Invernizzi, both at the gallery in public and private spaces.