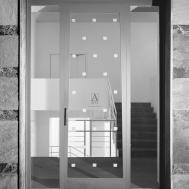 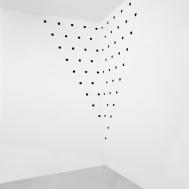 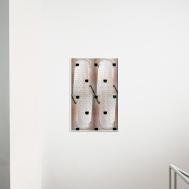 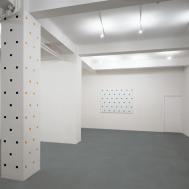 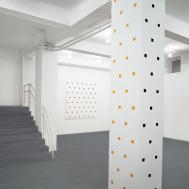 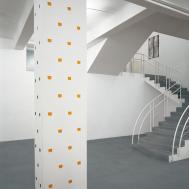 A arte Studio Invernizzi gallery presented on Friday 21 September 2007 the solo exhibition of Niele Toroni, who created for the occasion a new intervention in specific connection with the architectural development and the space morphologies of the place.
Born in Locarno-Muralto in 1937, Niele Toroni lives in Paris since 1959.
For 40 years he has been one of the protagonists of the artistic world scene: since 1967 he has worked out a characteristic and personal methodology based on the iteration of paintbrush imprints no. 50 which are repeated at regular intervals of 30 cm. During many decades this methodical formulation has assumed different conditions of realization, taking its shape on paper, canvas, oilskin, till it invades the space itself in its progression on walls, floors, ceilings, in a ideal equivalence of the differents media and contexts, considered as other possibilities of interaction with the real.
For up to four decades, the repetition of the same method, for Toroni, always turns into a different manner of referring to what already exists: according to the principle of the variation in the continuity, the results of the single intervention change both on their whole, in relation to the spatial and ideal morphologies, both in their inner articulation, in the different intensities and sometimes colours of the single imprints. The rhythmic progression of the same “made essential” gesture goes so far as to pervade, without interruption, its own intervention context, by necessarily and without mediation translating itself into an operative practice that puts itself as open and free hypothesis of intervention on the real: destabilization and contradiction of what is already known, in a perspective of opening up new horizons of knowledge.