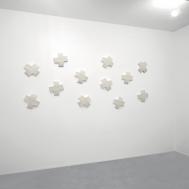 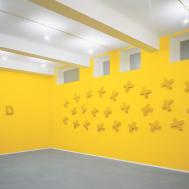 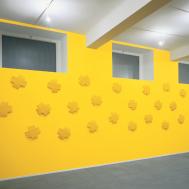 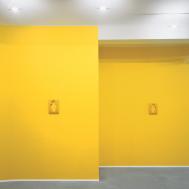 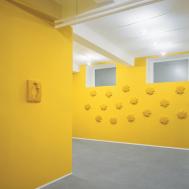 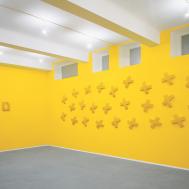 On Tuesday 6 May 2003, A arte Studio Invernizzi presented a solo exhibition of Pino Pinelli.
The work Pino Pinelli has conceived for A arte Studio Invernizzi modifies the gallery itself, articulating the artist's work in an envoronmental dimension.
Fragmentation and dissemination - distinctive characters of his pieces since the 70s - are here presented in a new formulation. They recurr as fundative elements of Pinelli’s activity, articulating themselves in a fresh interaction with spatiality.  In this exhibition, elements such as the relationship with the environment, the inner articulation of the image, the expression of a becoming pictorial surface, the seek for a dialogue among piece, space and observer,come to a preminent position in the artist’s activity, without erasing the precise and coherent identity of his creative course.
What Pinelli is pursuing is the tactile exaltation of the chromatic value, where the spectator is required to react immediately to the extension of the form in space.
The work does not in any way limit the chance to savour the magnetism emerging from each element, the ever-changing treatment of the surface, the imperceptible presence of the touches of the hand that make the skin of the colour alive and vibrating.
On the occasion of the exhibition, a bilingual catalogue has been published, including an introductory essay by Luca Massimo Barbero, the images of the works installed in the gallery and a bio-bibliographical notes.