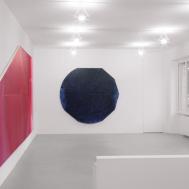 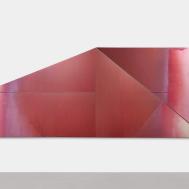 On Tuesday 19 May 2009 an exhibition of works by the artist Rodolfo Aricò opened at the A arte Studio Invernizzi gallery.
The exhibition is centre around a group of works executed in the 1980s: which was a particularly significant stage in Rodolfo Aricò’s artistic career. It was a phase following a long period of strongly introspective elaboration, which received public recognition on the occasion of the artist’s participation in the 1982 Venice Biennale, an event that marked the beginning of a completely new period in his painting. While, during the 1970s, Aricò undertook a tactile investigation of the structural and architectural archetype as a possibility of awareness of the limit and of the threshold between living and painting, in the 1980s the metamorphosis of life into painting and painting into life took place in a total manner, now without any interruption, which seems to have been the aim of Aricò’s art from the outset of his career.
Having exhausted the humanistic potential of the archetypes, Aricò moved, at the beginning of the new decade, in the direction of a human dawn that was prior to them, discovering a universal lyrical dimension that may be described as genuinely introspective if the term is understood in the sense of a primarily physical investigation of our existence as a fragment of the universe. This is a painful and inevitable inquiry - and the artist himself regarded it as such - that culminated with its all dramatic force in the torn and broken paintings of the 1990s. A tormented sense of humanity began to emerge from the fragments of the archetypes in order to reveal to us what the artist described as ‘provisional eternity’. This spatio-temporal dimension is nothing other than the eternal coming into being of everything, which is perceived intensely within oneself: ‘A way perhaps, of creating provisional eternity with painting and its anomalous mechanisms. If this is ethical, it is also the only condition of life that is unavoidable for me. Independence is, therefore, the only condition for loyalty to one’s own existence. I don’t know any other types of loyalty.’ All this was expressed in a very noble vision in which the artist was involved profoundly and ethically, with madness becoming, in effect, the only possible extreme limit to rationality and provisionality the only plausible epiphany of eternity.
This is what Francesca Pola has written in the introductory essay to the bilingual catalogue that will be published on the occasion of the exhibition, with photographs of the works on display, a poem by Carlo Invernizzi and updated bio-bibliographical notes.