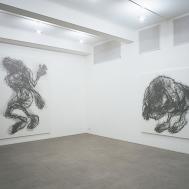 On Thursday 17 January A arte Studio Invernizzi presented a solo exhibition of the artist Rudi Wach, realized in cooperation with the Forum Austriaco di Cultura a Milano.
For this occasion, the artist, born in Hall in Tirol in 1934, created an unpublished cicle of large size drawings.
“Paying an increasing attention to drawing, Wach tried to transform it in an instrument not less worthy of consideration than his plastic work, partially exceeding it for a visionary quality that indicates new possibilities, and as a thought that indicates a path already covered by the artist. (...) But the ways Wach, in drawing, enters the regions of subconscious, estabilishes relationships with the myths and gives expression to the supernatural, reveal themselves as decisive and useful also for the sculptural activity. They are feeded by the experiences and discoveries of an artist who on one side lets himself be guided and involved in explorations pursued with obstination, and on the other is able to make figures formuled with increasing brightness and purity spring from a gradually developed canon.
Wach’s whole artistic activity, in a careful and quietly restless search, is intended to trace thoughts which are remote, or present in a rudimental way, concerning the man’s position in a cosmos that is becoming larger and larger; the artist swings between a ‘now’ and ‘here’ and the forms of a thought addressed to the ‘afterlife’, as Hofmannsthal has imagined it; he is touched by the testimonies of the past, he immerges himself in the depths of the soul, which acquired the awareness of this legacy through slow processes of meditation and autoperception.” This is what Kristian Sotriffer writes in the monograph that has been published on the occasion of the exhibition, with essays by Carlo Invernizzi, Maria Vailati, Elmar Zorn, an interview with the artist edited by Francesca Pola and a wide iconographic documentation.