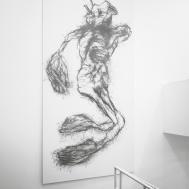 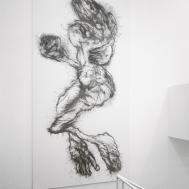 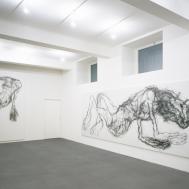 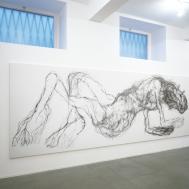 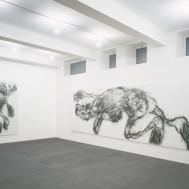 A arte Studio Invernizzi gallery presented on Wednesday 24 May 2006 a solo exhibition of the artist Rudi Wach who created for this occasion a cycle of large size drawings.
“Rudi Wach draws (...) bodies carried to extremes in the space (...) hanging bodies, seized during an unstable movement, that gets them into a position of dangerous inbalance. It’s hard to imagine them steady, stil, vertical; it’s a question of bodies that are being crossed by a movement which is actual part of their being. A movement hard to describe both in its developments and dynamics, and in its final destination, that we hard imagine whether it could end or be silent. Therefore it’s a movement that puts the body into a condition of transformation and instability. But it’s a real movement that also corresponds to a metaphor, hinting obviously at the condition of transformation that goes through the same biology of those bodies. The instability, the impossibility of staying, of assuming a certain clearly legible position, corresponds directely to the condition of instability and of not permanency that characterizes the threshold between what is human and what is beast. The recurrent theme in Wach’s drawings is dancing (...) in order to speak about movement, not as act of bodies, but as metaphorical symbolic and ancestral condition. As the act of procreation. The movement, as imagine of becoming that proceeds from the transformation which has been made ready for use by the inaugural act of creation. The movement and the becoming as body condition, that isn’t allowed to - and can’t - close itself into the closed sphere of identity any longer.”
On the occasion of the exhibition a monograph edited by Epicarmo Invernizzi has been published including essays by Massimo Donà, Carlo Invernizzi, Lorenzo Mango, Francesca Pola, Elmar Zorn, the images of the works displayed in the gallery and bio-bibliographical notes.
The exhibition was realized in collaboration with the Forum Austriaco di Cultura in Milan.