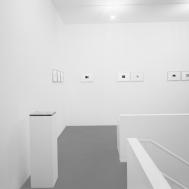 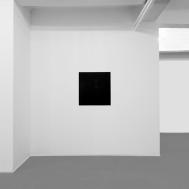 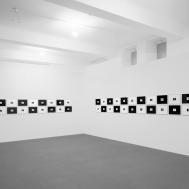 On Thurdsay 15 May 2008, A arte Studio Invernizzi gallery presented a solo exhibition of Ulrich Rückriem, where his most recent drawings will be on display.
Drawings from the Block series, founded on the progressive iteration of an orthogonal module, have been presented together with the Constellations and other new and more recent realizations, which exemplify diagonal projective dynamics. Such configurations are partly connected to his last creative path, centred on the possibilities of permutation and variation of the placement of 8 black squares or rectangles on a chessboard of 8 squares or rectangles per side. These drawings are generated by further possible graphic elaborations of the same structuring matrix: always starting from the hypothesis of the permutation on a chessboard, they replace the previous assertive orthogonal configuration by different and more varied diagonal dynamics.
Another work on display was the synthesis of the last exhibition realized by Rückriem in this same space in 2006, and it is created by superimposing a new series of drawings on acetate paper that show the 92 possibilities of displacing 8 columns on a chessboard composed by 8 squares each side. No matter how the columns are moved - horizontally, vertically, or sideways - they never meet, but remain isolated in the space: contained in a glass box, they create an unicum of design, drawing and sculpture.
The exhibition exemplifies a particularly meaningful moment in the German artist’s work: his main compositional elements, such as permutation and variation, recur also in this case, proceeding from the material to the immaterial and vice versa.

On the occasion of the exhibition a bilingual catalogue has been published including photographs of the works on display in the gallery and bio-bibliographical notes .